For everyone who didn’t know, it’s Banned Book Week this week. So I’m taking a look at some covers of a very commonly banned book, Of Mice and Men. After taking a look at how this book’s cover has changed over time, it’s interesting to see how the focus has shifted through the years. Warning: this analysis does contain spoilers of the book!

The first cover I chose, published in 1981 and located in the top left, shows the two main characters, George and Lennie, and a group of rabbits. Rabbits are mentioned throughout the book and are constantly used as symbolic tools to represent the life Lennie and George are trying to obtain together. In this new life, Lennie and George dream of living on a farm where they can have multiple rabbits, something that is very comforting and exciting to Lennie. However, this character is also known throughout the book for the violent, though also accidental, ways he treats animals and other things that bring him comfort. It’s this violence that inevitably robs Lennie of both his dream and his life. 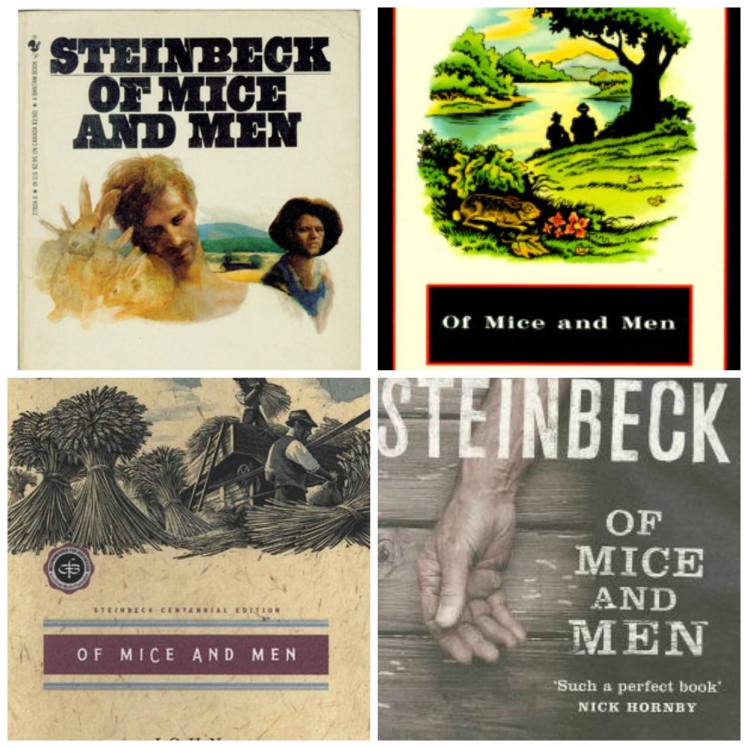 The second cover, which was published in 1993 and is in the top right corner, shows two men, presumably George and Lennie, sitting on a hill overlooking a lake. This scene can be taken from one of the last bits of the book, when George takes Lennie to a river bank and shoots him. Like the last cover, this cover has very dark undertones that are only understood after reading the book.

On the third cover, at the bottom left which was published in 2002, two men can be seen, one on the ground and one in the cart, but it is unclear who these characters are meant to represent. This cover focuses largely on the barley that George and Lennie become responsible for in their new job. However, once they begin working at this new job, the reader is introduced to multiple new characters. While it is at this job that Lennie murders Curley’s wife, this is the first cover that does not have any immediate symbolism that can be related back to the darker aspects of this book.

The last cover, in the bottom right and published in 2006, shows only a man’s hand and the side of his pants. This is by far the simplest of the four covers. It is also unclear who the hand is meant to belong to, George or Lennie. This book is also the first to have extra text, located directly beneath the title, reading ‘Such a perfect book.’ I found this addition to be extremely interesting. Not only were the violent symbols and themes removed from the cover, but the short review that was added seems to try to persuade readers to pick up the book.

I find the changes that this book has undergone throughout the years to be very interesting. While the first cover focuses on the larger, more reoccurring themes of the book, it could be taken by some as focusing on the more violent aspects of the story. The second cover, while focusing on perhaps the most important part of the book, can still be seen as focusing too largely on the violence that this book deals with. In the third cover, the reader is hardly given a glimpse at the characters and is instead directed towards the bails of barley. With each new cover, the themes of the book are shown less and less until all that’s left in the last cover is a single hand and an encouraging review.

This project was created by Nichole Currier for a special topics class at PSU focusing on literary taboos.

The Canon on Soundcloud: