Without musical accompaniment, can lyrics prove themselves worthy of literary merit?

It seems to go without saying that Bob Dylan is one of America’s most prolific musical talents, but are his songs impactful enough to warrant scholarly praise? Year after year, the Swedish Academy has awarded the Nobel Prize in Literature to one individual that they believe is deserving of the pivotal achievement, and in 2016 their pick was none other than the man who penned “Blowin’ In The Wind” and “The Times They Are a-Changin'”. 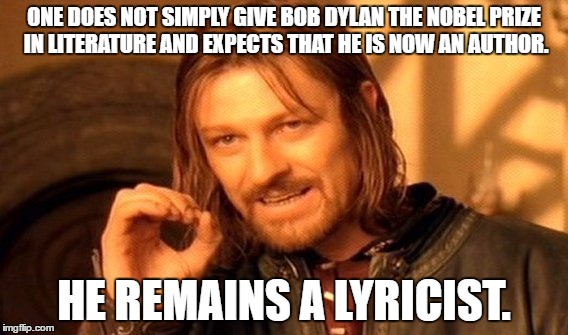 Reactions to this development in the literary world have been mixed, with some praising Dylan’s achievement and others disappointed by the fact that the prize wasn’t given to an author. Scottish writer Irvine Welsh had some particularly poignant fighting words:

“I’m a Dylan fan, but this is an ill conceived nostalgia award wrenched from the rancid prostates of senile, gibbering hippies. If you’re a ‘music’ fan, look it up in the dictionary. Then ‘literature’. Then compare and contrast.”

But is Dylan an author? The big-picture question at the heart of this whole debacle is one that is still being debated even to this day: How do we define literature? Typically, literature is associated with prose and poetry. However, lyrics are often likened to poetry set to music…so is Bob Dylan a poet?

“A writer is a writer. He just went the extra mile of adding instruments to accompany his works. Not all that different than how we accentuate poetry with white space, sound, and lyric. Everything starts in the pen, the art is in the composition, but his lyrics alone have impact.”

Isabelle Elsasser, a student in Abby Goode’s Currents in American Lit I class, had this to say about Dylan being awarded the prize:

“I feel as though Bob Dylan is a poet and that he deserves the Nobel Prize. His songs were written for listening and enjoying, and that is exactly what literature is. If you were to put one of his songs on a page and read it as a poem you would not realize that it was a song. Dylan wrote his song first on paper before he started to create music with it, so in that reasoning Bob Dylan was first a writer then a poet.”

It’s clear that Dylan’s victory has shaken up the literary world, so where do we go from here? Will this win lead to a broader and more diverse definition of literature? Are Steinbeck and Hemingway rolling over in their graves?

English major Lindsey DeRoche, also in Goode’s class, believes that soon we’ll look back at this occurrence and wonder what we were so riled up about in the first place:

“As the years progress, I believe there will be less walls within the art world. Hopefully, twenty years from now, people will be able to look back and ask, “What the heck was the big deal with Dylan winning? He’s an artist, just like any other writer.”

Right now we’re all still processing the situation, and so is Bob Dylan as evidenced by his prolonged (but now broken) silence, but perhaps this development will diversify the mysterious entity referred to as “the canon”. Whatever the heck that is.

I guess we’ll just have to wait and see.

The Canon on Soundcloud: